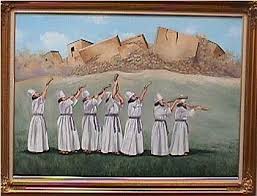 Did you know that in the Old Testament there are several passages that recount the stories of musicians not only leading worship, but leading processions carrying the ark of the covenant as well as troops going into battle against their enemies at the command of God? It’s really pretty interesting stuff!

II Chronicles 15:11-29 details the entire account of the Israelites returning the ark of the covenant of the Lord to its permanent place in Jerusalem as God had commanded. Verses 16 – 24 mention these facts: “David also commanded the chiefs of the Levites to appoint their brothers as the singers who should play loudly on musical instruments, on harps and lyres and cymbals, to raise sounds of joy….The singers…were to sound bronze cymbals…were to play harps…were to lead with lyres….Chenaniah, leader of the Levites in music, should direct the music, for he understood it….The priests should blow the trumpets before the ark of God….” Verse 28 sums up the entire processional this way, “So all Israel brought up the ark of the covenant of the Lord with shouting, to the sound of the horn, trumpets, and cymbals, and made loud music on harps and lyres.” (ESV)

Wow! It sounds to me like they were having a loud, jubilant, boisterous time of singing and playing instruments in praise to Jehovah! I believe they were rejoicing, happy, excited and thankful because the ark of the covenant was finally coming home! I see a parallel today as we worship God for His many blessings to us, bringing us “home” into His Kingdom through salvation, guiding and directing our steps and providing for our needs! Their loud, joyful songs and shouts of worship to God even caused King David to get so excited that he danced and rejoiced before the Lord, much to the chagrin of his wife, Michal. Verse 29 says…”Michal the daughter of Saul looked out of the window and saw King David dancing and rejoicing, and she despised him in her heart.”

I am not sure just what the reason for this was; perhaps she was jealous of his intimate, seemingly uninhibited worship and relationship with the King of Kings. Perhaps she wanted first place in his heart, instead of allowing David to give God (Yahveh) the glory reserved exclusively for Him! Whatever the reason, The Word tells us in another account of the same incident in II Samuel 6:21-23, “And David said to Michal, ‘It was before the Lord, who chose me above your father and above all his house, to appoint me as prince over Israel, the people of the Lord—and I will make merry before the Lord. I will make myself yet more contemptible than this, and I will be abased in your eyes’….And Michal the daughter of Saul had no child to the day of her death.” (ESV)   It is dangerous to try to share God’s glory with anyone!

One account of musicians leading armies in warfare is in II Chronicles 20:21 and 22, “…he (King Jehoshaphat) appointed those who were to sing to the Lord and praise him in holy attire, as they went before the army and say, ‘Give thanks to the Lord, for his steadfast love endures forever.’ And when they began to sing and praise, the Lord set an ambush against the men of Ammon, Moab, and Mount Seir, who had come against Judah, so that they were routed.” (ESV)   Merriam-Webster’s Dictionary defines the word “rout” this way: “A state of wild confusion or disorderly retreat; a disastrous defeat; debacle; a precipitate flight”.

Need I say more? When the musicians obeyed God and led the Israelites, praising and worshipping Him, He sent the armies into a panic, scattering and confusing them, so that they fled! Verse 23 goes on to say that the men of Ammon and Moab rose against the inhabitants of Mount Seir, devoting them to destruction and helping them destroy one another! Really, God does not need our help; only our obedience! When we have perfect trust in Him and believe Him to honor His Word no matter what the circumstances look like around us, He always comes through!

So, “get your praise on”, start singing to the Lord, playing that musical instrument and shouting before the victory is won. The Enemy of your soul hates it when you sing and shout before God works a miracle; he cannot stand to see you happy, calm and confident in God’s imminent miraculous provision and deliverance! So, why not begin to praise and worship the Lord right now? Sing, play and praise your way to victory!