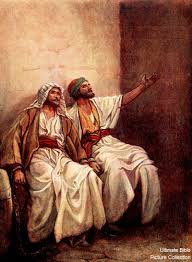 There were a couple of preachers mentioned in the Book of Acts named Paul and Silas.  Of course, most of us have heard of the Apostle Paul and his fearless preaching of God’s Word even in the face of great persecution!  Less well known, is his partner, Silas, who participated in several of Paul’s adventures in ministry to the Early Church.  Paul and Silas were not too interested in being “politically correct”! When they cast out a demonic spirit from a young girl who had been used by her wicked masters as a fortune teller, the masters became extremely angry because she could no longer bring in the money they were used to collecting from her services.  When these evil men saw that all hope of gain from her services was gone, they caught Paul and Silas, drew them into the marketplace before the magistrates and brought them up on false charges.  The magistrates, urged on by the violent mob, tore off the apostles’ clothes and commanded they be severely beaten with rods and cast into prison!  The jailor promised to keep them from escaping, thrusting them into the inner chambers of the prison, and binding their feet fast in the stocks.  (Read the entire account in Acts 16:16-24)

So, what did Paul and Silas do?  Did they begin to complain and cry out about being falsely accused and the harsh treatment they were forced to undergo for the cause of Christ?  Did they try to contact the Church leaders and circulate petitions for their immediate release?  Did they weep and wail to God, asking Him to explain to them why they were forced to endure such horrible pain and suffering?  You and I might have done this, but the Word of God says in verse 25, “And at midnight Paul and Silas prayed, and sang praises unto God: and the prisoners heard them.”  Evidently they made a great noise with their prayer and praise meeting!

Apparently, God heard it, too, and was pleased with their praises and worship to Him.  It seems He began tapping His foot along with their praise songs, because the Word says in verse 26, “And suddenly there was a great earthquake, so that the foundations of the prison were shaken: and immediately all the doors were opened, and every one’s bands were loosed.” (KJV)  When God gets ready to release you from your bondage, nothing on earth can stop Him!  God can work in amazing ways to confound even wicked leaders!  I believe we have been seeing some of this lately in our own country! Remember the Tower of Babel, where God did not allow wicked men to prevail and confounded their languages?

Getting back to Paul and Silas, verse 27 says that the keeper of the prison, awakening out of a sound sleep, was ready to kill himself with his sword when he saw the prison doors open and all the prisoners’ bands loosed!  “But Paul cried with a loud voice, ‘Do not harm yourself, for we are all here.”  (Acts 16:28, ESV)  The result of their obedience to the law and not just escaping caused the jailor to ask them, “Sirs, what must I do to be saved?  And they said, ‘Believe in the Lord Jesus, and you will be saved, you and your household.'”  (verses 30 and 31, ESV)  Paul and Silas spoke the word of the Lord to him and all that were in his house!  Then the jailor washed and cleaned up their bloodied backs from the beating, and he was baptized, along with his household!  He also gave them supper in his own house and rejoiced, believing in God with all his house. (verses 32 – 34)  The next day the magistrates came and publicly apologized to the apostles, letting them out of the prison and asking them to leave the city. (verses 35-39)

Wow, what an amazing story!  Just another day in the life of the Apostle Paul?  Or is there a deeper truth for us today from this story?  Could it be that God wants us as His children to offer Him the sacrifice of praise and worship even when we are faced with extreme difficulty in our lives, wickedness in our leadership, and seemingly insurmountable obstacles?  Does it sometimes seem that all of our prayers are futile?  God sees all and in His sovereignty can deliver us out of even the most extreme persecution if need be.  Sometimes He doesn’t deliver us from it, but allows us to go through it, to show His power, delivering us out of severe pain and suffering as we praise and worship Him in the midst of it, just as Paul and Silas did!

What a beautiful lesson of God’s deliverance and power in the lives of His servants!